It took quite a few baskets and a several highly experimental rug attempts until I was able to muster up the courage for a simple proposal to a very special someone:
“Umm… Of course if you’d like a rug…”
How delighted I was to receive that simple leap of faith:
“Sure, why not?”
A quick trip to the fabric yarn shop, and back I was with two bags of everything bright and pretty.
The choices were made by the recipient of the rug (the colors and their placement  – I’m not sure I would have been as bold!), whereupon stitching was begun… And not stopped until I had this!
It reminds me of a bright sun in a circular sky, and so the title, but I admit it also has to do with the recipient. 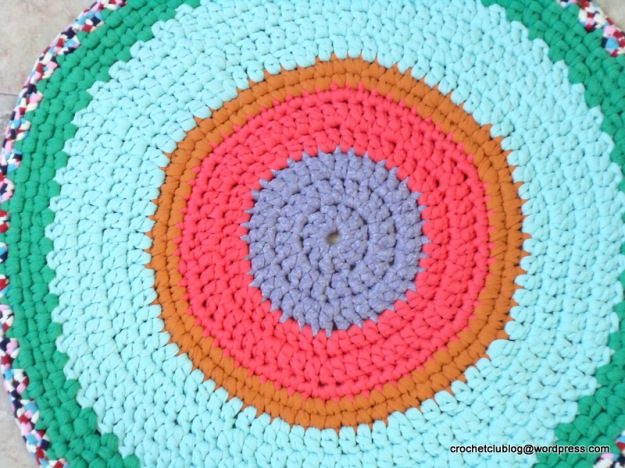 How I Made the Rug:
I used a size 12 crochet hook and medium-width, medium-stretchy fabric yarn.
I started with a magic ring, stitching 12 dc into it, and ending the row with a sl st into the first dc.
To start a new row, ch 3 (or ch 1 if you’re starting a row of sc).
To start a new strand/color in a new row, sl st into previous row, and chain the number of stitches needed (ch 3 for a row of dc or ch 1 for a row of sc).
I used dc or sc alternately, depending on the texture of the strand – for softer or thinner strands, I used dc. For less flexible or thicker strands, I used sc. Another consideration was the color pattern – for example, rows 4-5, the orange, were done in dc, but for row 6, I used sc, because another row of dc would have made the orange circle too large for the composition.
How did I know this? Because I tried it, of course!
This is my favorite designing method – make, undo, remake until you’re happy with the result.
Of course, a row of sc takes up less thread too, so when you’re nearing the end of the strand, this may be a consideration (not so in this particular case).
The increases are made as usual – 12 increases for rows of dc, 6 increases for rows of sc.
When I reached the green strip, I switched to woven stitch (here is my explanation on woven stitch).
But you can continue on with sc.
The main reason I used woven stitch here is because my green strand was thicker than the blue of the previous row, and I thought the woven stitch would be less bulky.
Accommodating stitches to the strand type is one way to integrate different types and widths of strands in the same project.
But whatever stitch you are using, it’s important to remember that if you have a thicker strand, you may need less increases in the first row of that strand, and if you have a thinner strand, you may need more increases in the first row of that strand.
So there is always the formula for increases, but you have to look at the outcome and see if your rug is lying nice and flat.
Generally: Flat is good, wavy means you have too many increases, and bowl-shaped means you don’t have enough increases.
The final crazy-colored row was done in 2 sc into each space of the previous row (space = below ch st).
Increases for this row, when needed, were done with 1 ch st between 2 pairs of sc.