How old is eleven? Not too old to receive a Kitty basket!

The idea for this basket came about a while back, when my niece M.’s birthday was still quite far off. I was crocheting a roundish basket with fabric yarn, and when I looked at the shape, or rather, when I felt the shape in my hands, I found myself thinking: If only this were in white… And had ears and whiskers… You see where I’m getting to.

But when M.’s birthday was nearing, I stopped to wonder for a moment – is eleven still okay for this? You know, eleven – old enough to babysit the neighbors’ kids, and understand a lot of things, and make beautiful drawings and handicrafts, and help around the house…

The answer I gave myself: Of course! 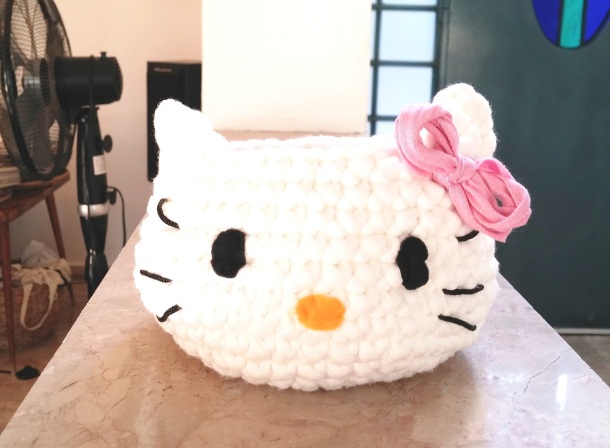 I made a white, roundish basket, then made ears, and eyes, and whiskers, and a little bow. It was such  fun to make, and fun to give! And judging from M.’s response, I think I got the answer right.
Probably, not a moment too soon…

Some Tips for Making a Kitty Basket:

The basket was crocheted in yarn under single crochet stitch (a favorite stitch with me), using a size 10 hook and white fabric yarn. The basket was formed by crocheting in a spiral.

The eyes and nose are cut from felt, and sewn on (you could probably paste them on with glue).

The whiskers were stitched onto the basket (each whisker is a single, jumbo-size stitch), and the thread is an old glasses cord.

The bow is made from a scrap of fabric yarn.

These were the last of them, at the top of the tree – well, at least at the top of the ladder. They were sweet, after hanging onto that tree, and sipping up every bit of sweetness and sunshine throughout the winter… They were also a deep orange, so much so that I found it hard to believe that they were ever green… We picked and ate quite a few in between, thinking each time that this was as big – and as orange – and as sweet – as they would get. Faith, patience, persistence… If we were lacking in them, the tangerines were not. 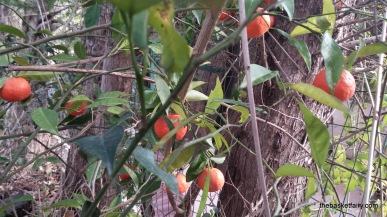 Patience and persistence is what that old pair of jeans had, too. To wait around, faded and torn, for years – decades! Till that moment of grace  arrived and their fabric was turned into a useful and pretty denim basket. 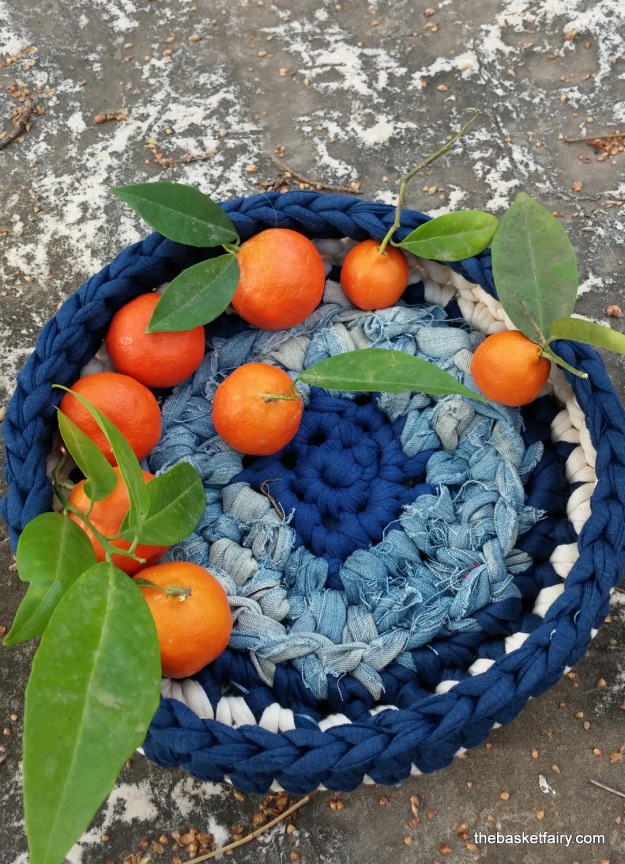 Well, will you believe me if I tell you I crocheted, un-crocheted and re-crocheted parts of this basket as many as ten – fifteen – okay, twenty times? (Did someone mention patience and persistence?).

See, it is exactly when something is “natural”, “coincidental”, that you can get to the point where – it’s not quite right, and the difference between messy – vs. cool – can be a stitch here and not there, that perfect shade of blue, and two, not three rows in height.  In the end,  I like the outcome – it just took me some time to realize This Was It.

A good thing all that time, the tangerines were busy ripening on the tree. Have some,  please – or you’ll have to wait till next year!

Remember Louis , the neighbors’ cat for whom I made a cozy basket? All summer, Louis spent most of his time outside, and so I waited with a certain interest to see whether the basket would do its job of keeping Louis warm and snug.
Then one day, when the weather was starting to get a little chilly, I received this on-site photo from Louis’s people: 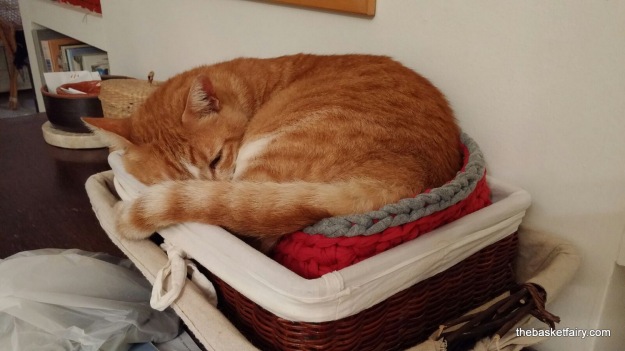 I was delighted! Louis is actually using his basket, and he looks as pleased and snug as… Well, a cat in a basket! And take a look at this one – one can only imagine what sweet dreams he must be having (about the summer, when he was chasing toads?). 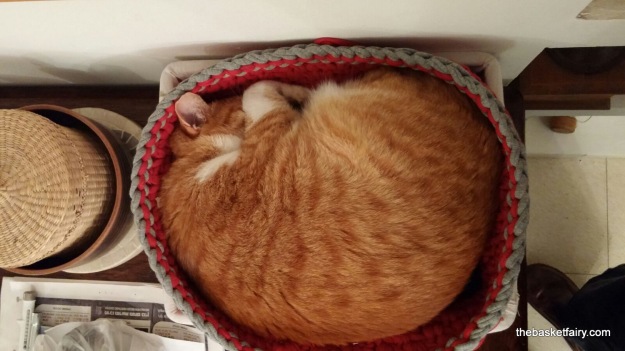 Louis’s new basket is perched on the exact same newspaper basket that he was using to snooze in before he received my gift. Rather than give it up, and finally allow his people access to their newspapers, Louis apparently decided that two baskets are better than one. Like many a cat, he has a certain regal inclination to assume he will meet little resistance on such matters from his people, which of course proved true in this case. 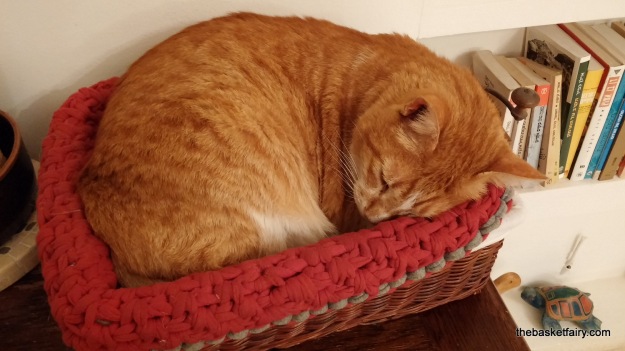 Which brings me to another Louis, one much closer to kings and thrones and such, but let me tell you the story as it actually happened or you will not believe me!
Soon after posting about the basket I made for Louis, I was googling the title – but typing in “A Basket for Louis” brought me to another Louis, in another basket, in another place – and not just any old place – but the splendid and ancient Wells Cathedral in England! I quickly read on to see who this famous feline was – and lo and behold, it turns out the Wells Cathedral Lewis is a ginger tom-cat just like our next-door Louis!

I was speechless… Our neighbors’ cat has a world-famous doppelganger! So famous, he’s even had a little film made about him… Louis of the Cathedral is so eerily like next-door Louis – in his appearance, in his tom-ish nature, and in his love of snuggling in cozy baskets. Like our next-door Louis, Cathedral Louis reigns from his basket over the abode that he resides in, certain that he is the true regal ruler of the premises. 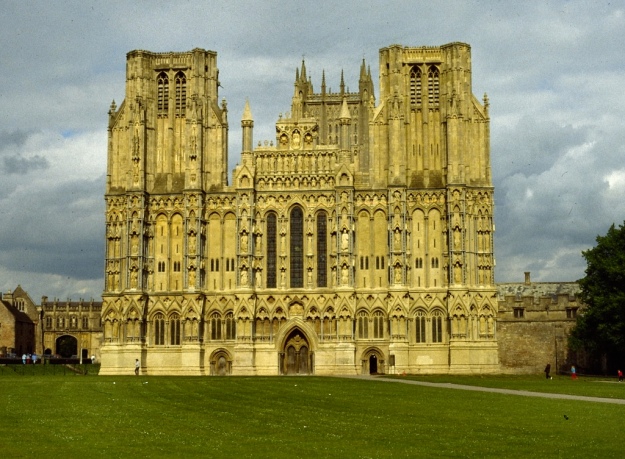 I read the stories about Louis the Cathedral cat with fascination, looking for a possible explanation to this uncanny coincidence. Twins separated at birth? Some cat-magician casting a spell? You may think there is a logical explanation, such as – our neighbors having heard of the Cathedral Louis when they named their cat – but I assure you that this is not the case! You see, Louis was a lost kitten when our neighbors took him in. The name Louis was chosen by a little girl who didn’t speak a word of English at the time, in a country very far from England and its cathedrals. I have no idea where she’d even heard the name, but it must have sounded exotic to her.

And so the mystery remains. Perhaps ginger tom cats with regal inclinations and a love of cozy baskets simply inspire the name Louis in their people? For while the Cathedral Louis is very princely, you can see by now that our neighbors’ Louis is far from a pauper. He spends his winter days snuggling and snoozing in what is definitely the best spot in the house, close enough to the wood stove, with a good view of the front door, in full control of everything and everyone. In summer, he reigns over the great outdoors, coming and going as he pleases.

As cats are not big travelers, I doubt these two will ever meet. It is also quite unlikely, given the geographical distance between them, that they were ever exchanged. But I hope they both continue to enjoy their different – and yet somewhat similar – lives, snug, happy and purring with royal content. 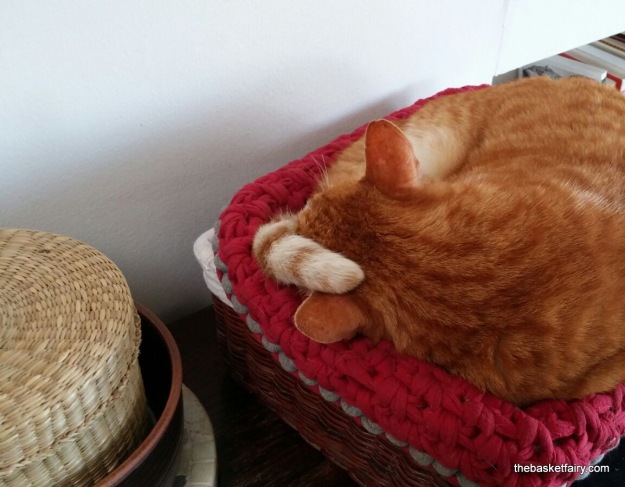 Walking home from the bus stop I passed by the clothing recycling bin. Next to the bin was a plastic bag with some children’s clothes, and on the top was a boys’ dress shirt in turquoise with purple-pink stripes. How could anyone think of turning that into clothing pulp, or – as rumor has it – cloth wipes for the car wash industry? Mercy knows no boundaries, and so I picked up the shirt and took it upon myself to deliver it to the second hand shop, whose earnings all go to scholarships for disadvantaged girls. Which is how it landed upon my good deed roster to also launder it. It was only when I took the clean shirt down from the clothing line that I noticed it: An amoeba shaped fade-stain on the front right next to the second button from the bottom. By now, however, there was no turning back: Our destinies were intertwined, and knew I had to do what I had to do – tear the shirt up into strips and crochet it.

Whether bounty or burden, I could not deny the delight of hooking this delicious color as a trim for a small basket.
I used an equally delicious pale magenta strand to make a soft but sturdy basket that I have not yet decided how to use. In the meantime, it is posing here with some hand-picked tangerines, a gift from our dinner guests, or rather, from their tree. Is there anything fresher or sweeter?

And a close-up view of the recycled trim. The frayed edges give it personality, but also actually keep it from unraveling better than cut edges: